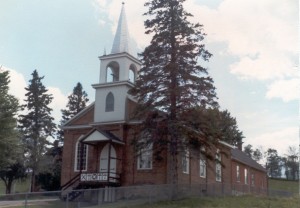 Frederick Simpson Coburn (1871-1960), was erroneously believed to have painted the scene. However, Coburn was the one who actually suggested the site to the Canadian government photographer. It was the photo of this site which was later engraved by the Treasury Department. Landmarks shown in the photograph of Upper Melbourne include: St. Andrew’s Presbyterian Church; the Doyle house; Arthur Quinn’s blacksmith shop; the Cogan house; the Alexander farm upstream; and the John Martin farm across the river. (“Canada’s Two Dollar Bill, 1954-1975”) 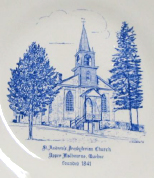 Although Frederick Simpson Coburn did not paint this scene, it is understandable why this drawing was mistakenly attributed to him. He had a deep affection for creating oil paintings inspired by nature and landscapes. His favourite settings were winter scenes in which horses and cutters emerged from the forest into clearings. (Kennell) Coburn studied at the Arts and Crafts School in Montreal, and later at art schools in New York, Berlin, Paris, London, and finally Antwerp, where he married and worked as an artist for twenty years. In 1897, he established his reputation as a skilled illustrator with his contributions to Canadian poet, William Henry Drummond’s publication, The Habitant and Other French-Canadian Poems. His career continued to flourish as an illustrator for literary works by Louis-Honoré Fréchette, Washington Irving, Alfred Lord Tennyson, Robert Browning, Charles Dickens and Edgar Allan Poe (Kennell). Upon his return to Canada in 1913, Coburn set up a studio in Melbourne, Québec where he worked for forty years. He was made a member of the Royal Canadian Academy of Arts in 1920. (Farfan)

Frederick Simpson Coburn joined his beloved landscape of Upper Melbourne while the 1954 $2 bill was still in circulation. He died in 1960 and his gravestone stands in St. Andrew’s cemetery located about one mile from the church on the next road up the hill.